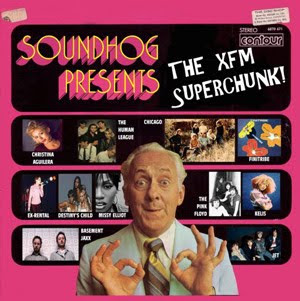 November 2003. Done for Eddy Temple-Morris' XFM London show "The Remix". The sound of me throwing everything into the pot. Half an hour of full-on editing madness with The Pink Floyd, Chicago, Primal Scream, Finitribe, Dave & Ansel Collins, Area Code 615 and more. Of course, it went straight over everyone's heads...
"The Remix" was (and maybe still is, I'm not sure) the main port of call for anyone who was into the bootleg/bastard pop scene in those early days from 2000 to 2003-ish. Today, every 'superstar m*sh*p maker' has their own website, MySpace or whatever where they upload their wares for anyone who cares enough to download their 'art'. Back at the start of the 21st century, it was all very different. Bootlegs in general existed on white label vinyl or short runs of CD-Rs, hiding away in the racks of the Rough Trade shop or being passed to up and coming DJs like Kurtis Rush or The Fucking DeWaele Brothers. To hear them, you either had to go to Cartel Communique's "King Of The Boots" night in London, grab the odd shakily encoded mp3 from Daniel Sheldon's 'Boom Selection' blog, or listen to "The Remix".

By mid 2003, I'd already got sick of the whole affair and decided to pack it in (not for the first time, eh?) as already I sensed that I was either doing something totally wrong or I was wasn't pandering to the idiot public enough - everything I heard that was meant to be brilliant turned out to be shit. Nothing changes, really. Anyway, James Hyman (who was at the time co-presenting The Remix with show originator Eddy Temple-Morris) suggested I do a 'Superchunk' mix for them. Well, it would have been rude not to.  Most of the properly famous DJs/producers of the era had done one.  I'd considered most of them to be fairly rubbish.
I really went to town on this, even more so than on the BBC mix of the previous year. And again, maybe I was being too clever-clever by constructing a mix that ducked and dived all over the place, with elements that only about seventeen people in the country would recognise. But it got a pretty good reaction from the people I wanted it to appeal to, and I still like to listen to it occasionally. By the time it went out, James and Eddy's working relationship was in shreds and as a result Eddy had no idea who I was or why I was there when I turned up at the radio station, with CD in hand! Still, the worn sofa was very comfy and I had a pleasant evening "hanging out" like a  pop star... well, sort of...

The version here isn't the exact one that went out on air - it's an earlier edit that was a bit too long for the strict 30 minute radio slot - but I prefer it, as it gives the Liberty X section more room (which happens to be one of my favourite parts) as well as a few other differences. Again, my love of audio buffoonery was put to use, with sections from a Monty Python album (note the fart noise used to cover a tricky edit in 'Bootylicious'), a 1960s Decca stereo demonstration record (not the usual 'Journey Into Stereo Sound' though), an almost ironic sample of legendary Human League/Buzzcocks/Raybeats/Then Jericho producer Martin Rushent, and a genuine cassette tape 'disaster' as a way out of the increasing disco inferno.

This mix restored my faith in music.