One song to the tune of another...

Something I did last summer, and promptly forgot about until now.  Goldfrapp and Edwyn Collins combine forces to create a '60s pop smash that never existed.  This is not a m@$hup - it's far too good for that nasty little label, thank you very much.

Alternate download link, now that Soundcloud is maxed out: http://www.mediafire.com/?8e8yta58wz3y62r

I thought it might be nice to reupload the other three episodes in the short-lived (but it's six hours worth of stuff) Mix90 series, which I did a few years ago for some reason or other. Originally I'd intended to do some sort of, ahem, 'podcast' - i.e. more like a radio show - but despite having notched up something like 20 hours of talking on the actual BBC type radio about music and records over the last few years, I'm still not very good at it and I just can't stand the sound of my own voice. I'm not the only one, either.  Ha ha.  So, they're strictly me-less.

Each is a 2x45 minute rampage through my record, tape and mp3 collection, taking in all the things which make me glad that my ears still just about work.  Krautrock, TV themes, psychedelia, library music, easy listening, avant garde, freakbeat, moogy blues, post punk, electronic weirdness, prog, beat, and good old fashioned pop music, with more besides.  If you don't like any of those sorts of things (which is unthinkable to my mind but it does happen, and I've got the e-mails to prove it) then you'd best stop reading now, and go looking for some m@$hup crap or something elsewhere.

However if you do like those sort of things, or are just willfully open minded, I don't think you'll find many duffers in here.  This is the sort of music which doesn't send me diving for the radio/TV 'off' button, doesn't force me into leaving a shop without buying what I went in there for when it comes blaring over the PA system, and doesn't send me into a mad shouty rage directed at the nearest unfortunate human, even if they weren't personally responsible for the assault on my hearing.  There's way too much noise in the world these days.  Music should be something to be enjoyed, not endured.

There's no clever digital stretchy-wankery involved here, just some deft edits, interesting juxtapositions and tunes that go nicely with one other.  There are also some little curios - old adverts, bits of TV continuity, pirate radio broadcasts and other aural oddities - dotted around and about, as an added bonus of sorts.  It's all part of what makes me the person I am.  Yeah, well...

I won't type out the tracklistings here as you can see them on the inlay cards beneath (click on the images for bigger versions if you can't read them).   There were also supposed to be extensive typed 'sleevenotes' about each track featured, rather than me bumbling on for ages in front of a microphone, but I only did this for mixes #2 and #3, spending bloody hours on them.  By the time #4 rolled around, the lack of any response to what I was doing ensured I couldn't be arsed anymore.  You'll find the text files in the download .zips of those mixes.  Don't take everything I write as gospel, though.  I don't quite know everything, so some details may be incorrect... but that doesn't bother most people who spout off about various subjects on the internet, so sod it.

The Mixcloud versions do sound pretty rotten I'm afraid, due to the low quality mp3s I had to transcode them into to get under the 100mb limit, but they should be ok for background listening. The mp3 downloads are 192kbps, so a much nicer experience all 'round. Your choice, should you choose to listen at all. You'll find #2 here, by the way, if you've not already got it and fancy the complete set. Right, without further ado, let's party. 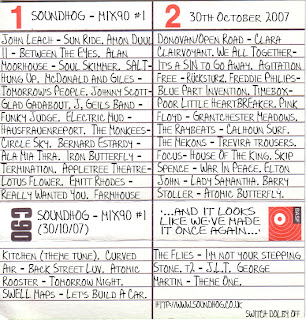 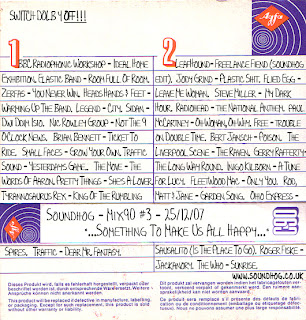 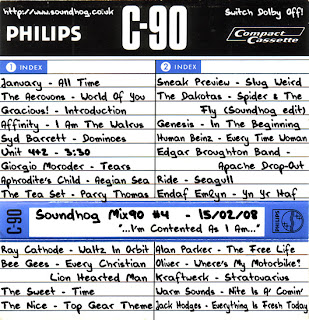 Quick note: People that I'm not...

I've had a couple of people asking if I really like X, or really said Y on various parts of the internet. Well, it would seem that my 'nom de plume', after 10 years of me being the only one using it, has suddenly become slightly popular. So, I just thought I should make it clear that I am not:

Nor am I an 'app' for a mobile phone which tells you what horrible record you're being subjected to in the local pub, a silencer for a gun, or indeed a club for Harley Davidson owners.

If any more turn up I'll amend the list accordingly. Ok? Good. As you were.