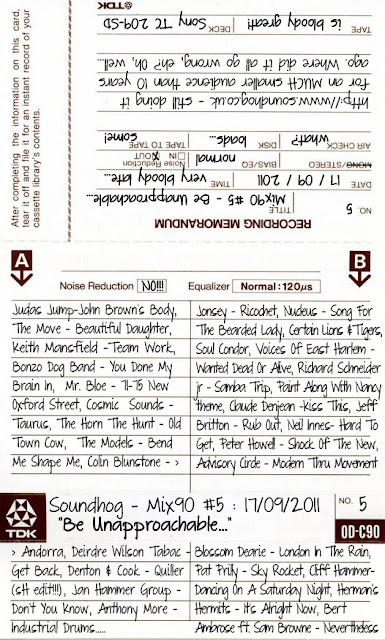 After nearly three and a half years, I've decided (for some reason) to do another Mix90 compilation tape. Despite the pathetic amount of listens my other recent uploads have gained, I figured it was worth doing. No, I don't understand that way of thinking either. Anyway...

There's all sorts in here: some great pop music you may not be familiar with, some nice bits of electronic library music, some obscure TV theme and testcard tunes, early '70s rock, a little bit of soul and funk and other lovelies. I've also thrown in a few old radio/TV ads, snips of presentation and other odd little bits and bobs from my ridiculously haphazard archive of sonic stuff. Some of it has been recovered from seriously knackered old audio and video tapes, so I make no apologies for the lack of 'high fidelity' in parts. I also make no apologies for the fact that Neil Innes appears twice.

Listen online in mushy Mixcloud quality, or download two spanking 320kbps mp3 files.  Either way is fine with me.