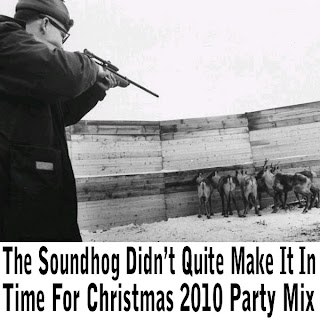 The original idea for this was to do a quick DJ-style mix of some of the music I'd really liked in 2010, as some sort of a 'internet gift' gesture to all the lunatics who still give half a shit about what I do (or don't do, more accurately). That idea didn't last long, as I soon realised new music in 2010 had almost completley passed me by. So I've thrown a few recent tunes in with a load of old ones, stirred it up overnight, shoved it into a limiter for 10 minutes and here's the result.

This is not 'Radio Soundhog Vol. 8', as that will never exist. This is probably the nearest thing I've done to a "regular dance music mix", so apologies to those expecting intricate cut and paste shizzle, but that's not to say that some bits aren't put together in a way that nobody else could. Or would want to? I've no idea. There are also nods to some people who left the planet in 2010 who meant a lot to me. Play it loud, play it drunk, but don't let the pips get stuck in your ears.
/ ben sH - 26/12/2010
Posted by ben_sH at 1:05 PM 6 comments:

...of their new record. 'Released' the other day, to no interest whatsoever, as per fucking usual.  It's very long, and probably too slow, at 120bpm, to get the drug-addled kids of 2010 throwing shapes on the dancefloors of the world. I'm very out of touch, and frankly I prefer it that way. It also features a chorus of singing synthesizer ducks, and Phil Oakey doing an impression of a Dalek doing an impression of Phil Oakey. I really know how to sell stuff, eh?