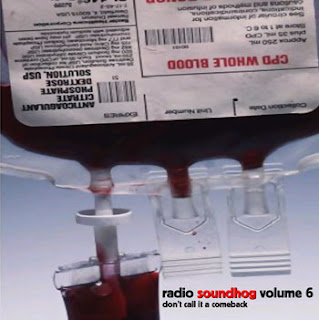 2005 turned out to be a really quiet year, both for DJ dates and output. Things hadn't started off any better than the end of 2004, and after finishing "33 Problems" I wasn't really in the mood to do much. But you snooze, you lose... well, you lose even more I suppose. I started work on what became RsH 6 in the spring, planning on making something very breakbeat driven and a lot more technical that RsH 5. The section from Traffic's "You Can All Join In" to Uptown's "Dope On Plastic" was knocked off in a couple of days. I then got bored and didn't touch it again.

Thanks to my friend and fellow Curdler-sufferer Mike Wheatley though, things changed. Mike had suggested to James Hyman in October that he should get me to do something else for his XFM show. James asked, and I agreed. I was going to start from scratch, but in the end I took the 10 minutes worth I'd done 6 months previously and built the rest of the mix around it. This process took something like six weeks. The main problem was that I would spend so long fiddling about with the smallest details - it got to the point where 6 hours of Ableton time resulted in about 20 to 30 seconds worth of finished audio per night. I'd spend ages moving the pan position of a sample, or putting in tiny reversed bits, or whatever. By the time the thing had got to about 45 minutes worth, I just couldn't do any more - so the final 10 minutes or so were just "put something in and let it play"... 45 mins does seem to be the "natural span" of my mixes these days. It must be some subliminal desire to make it fit on one side of a C90.

It eventually went out on Xmas Eve, 2005... (well, a couple of hours into Xmas Day, actually) ...so most people were either asleep or drunk when it was on. Still, it could have been worse and gone out on New Year's Eve or something. I think it's a good piece of work, and I was particularly happy with the section from "I'm A Man" to "Astradyne". As usual, most people wouldn't realise just how much fiddly effort went into making it all work, but sod it... I'll wait for the 20th anniversary deluxe remaster.
Posted by ben_sH at 10:40 AM

Now that the original full "World In Action" has finally emerged:

any chance of re-creating the Howard Beale version more hi-fi? But perhaps that would spoil it...

Erm... dunno. Funnily enough I got sent a copy of that full-on closing theme (along with a couple of out-take versions) just after I'd finished the mix, and it was too late to drop it in by then. I think I sent it to the chap who put it on YouTube after I discovered he'd put my version up. Shame I didn't get any more 'interest' off it, but there we go.

I'm not sure it'd be worth going back to it really, and it was always meant to be part of the big picture rather than a little thing on it's own. The opening theme would always be rough though as I've never found a better version of it (I edited the opening and closing themes together, you see). You could make a good video to go with though, I suppose. Hmm. We'll see...

The World In Action / Network mix is among the best things ever associated with the word "mashup".