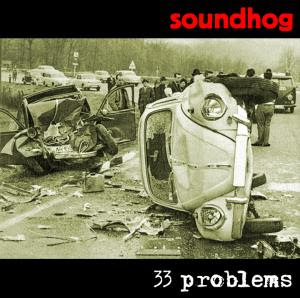 I can't remember a great deal about the making of this mix. It was put together over three evenings at the start of January 2005 from what I recall. Those evenings saw me in a really bad mood for various reasons and a lot of it came out here. An odd way of relieving one's tensions perhaps, but it made me feel a bit better for a few days. The copious amounts of red wine I was guzzling during the process helped a bit as well, and probably account for the pretty ludicrous ending to the mix (as well as the decision to put The Scorpions into there, I assume!)

From a technical point of view, this was the first project I put together in Ableton Live (version 4 I think it was) which is now my sonic weapon of choice. The 'warp' function for straightening out tempo fluctuations in samples was a godsend, and allowed me to use yet more diverse material without having to spend hours chopping it up into tiny parts, stretching/shrinking them, and stitching it all back together again. I couldn't use anything else now, but you only get out what you put in of course. And I put in a hell of a lot.

The smashed Beetle on the cover photo is also quite significant - not only had 2004 seen me in a car accident which destroyed my 1956 Beetle and did a fair bit of damage to my face as it went through the windscreen, but my long time love affair with the 'scene' surrounding the vehicles ended in yet more bitterness and resentment after getting too 'involved'. The closer you get to the centre of something, the more shit you discover at the core, I find... (the hundreds of 'flies' buzzing around don't help either). 'Scenes' are A Bad Thing, in music or any other walk of life - be warned. Anyway...

There are many parts of this mix that still bring a smirk to my face... I'm particularly fond of the part where things get really intense, as Mario Savio's 1964 speech to student activists at Berkeley gives even more anger to Vitalic's awesome 'Fanfares'. 'Your Love' coming in over Blackstrobe's DM remix. The opening of Cabaret Voltaire's seminal 'Nag Nag Nag' being stretched over one of Soulwax's finest tunes. Getting my favourite dance tune in history on there ('Hardcore Uproar')... The use of the A House tune is, of course, totally ironic. Honestly. Play this mix as loud as you possibly can.
Posted by ben_sH at 1:34 PM

I think I prefer this site to the old one!

TBH, I wish I'd done it ages ago, except that there was no mixcloud or anything back then. It's proving just as easy to forget about as the old one though, I suppose I should put some more stuff up...

This was the first mix I got of yours = good memories for me. Must have listened to this at least a hundred times and then waited for every new release (much more difficult to find earlier stuff back then even though it was after the days of napster and limewire)- I've still got my original CDRs somewhere. I enjoyed every mix you released. Thanks to you hundreds of songs will always sound half full at best. Thanks and take care.

love what you did with sheer taft!