Paul McCartney vs Soundhog - Take It Away - 'Rubber Dub' 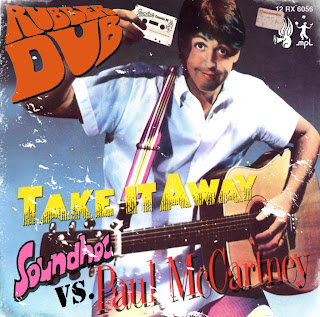 Greetings, rat-fans.  So, to celebrate avoiding Xmas successfully for the 17th year running, I grabbed the first 30 seconds of Sir Paul's 1982 pop masterpiece, and attacked it with various cheap (or fairly cheap, in the scheme of things) sonic devices. These included a Korg Monotribe and Monotron Delay, a Melodica with most of the keys working, a 1970s Sansui hi-fi reverb unit and a Stylophone - an original example, of course.. not one of those iffy new ones - for as close to a live dub mixing session as I'm ever likely to indulge in.  It may not be very 'authentic' (I am after all a strawberry blonde, 41 year old garage mechanic from north Wales) but it was rather fun to do.  Hopefully it'll be fun to listen to as well.

Nearly one year on after the last one, here's the seventh installment in my sporadic Mix90 series. Number 6 did quite well, for some reason, so being one to take full advantage of a situation... er, yes.

What's here this time? Oh, the usual. Italian prog, Scouse powerpop, Welsh surf rock, Canadian library music, South African psych-soul, Catalonian motorik-dream-electropop, English DIY, German balladry, Japanese glam, Chileian folktronic aceness... plus loads more, knitted together with odd little audio snippets, weird adverts and what have you. Much like the others, really. If you haven't heard them, then get on with it. The world was meant to end a few days ago and we might just be experiencing a temporary delay... Anyway, hope you manage to find time to listen to this one, and I hope you like what you hear if you do. Let me know, innit?
Posted by ben_sH at 3:45 PM 3 comments:

Right, well I thought I should really post up some of the things I've been up to on here since the last time I made an entry in this blog.  I've been making the mistake of just putting everything up on my f@cebook 'artist' page, but it would seem that very few people are actually noticing anything.  This could be general disinterest, or it could be due to f@cebook trying to make money out of people... whatever, I'll try and put stuff up here as well as a result.

So, first up my Soundcloud page got very full and I ran out of things to delete from it.  Therefore I've made a new one, specifically for older tracks and whatnot.  I'm being fairly selective about what goes up there, but there are a few nice things so far.  The page is here:

One of the things on there is old but previously 'unreleased'.  It's a re-edit of a track by a fairly obscure UK post-psych outfit called 'Second Hand'.  There's more info about it on the Soundcloud page, but here's the track itself - looped up and extended by a couple of minutes or so.  Could prove popular at discos, assuming they're odd discos.


What else?  Well, I've been fiddling about with my small arsenal of 1970s monophonic analogue synthesizers (Roland SH2, Korg M500 and a borrowed Micromoog), finally managing to get them under control of my audio software, thus removing my dodgy keyboard skills from the equation.  The first results of this are a remix I've done (for a competition, never thought I'd do that but still...) of a Pepe Deluxe track.  My Flaming Thirst is an epic pseudo-Bond theme from their recent album 'Queen Of The Wave'.  I've turned it into something which starts off somewhere between 'Oxygene' and 'Wish You Were Here Part 1', and ends up into more motorik territory.  I think the drums came out pretty well, here.  It's not downloadable just yet, but I'll enable that feature once the judging is over.  I won't win, I'm sure, but I tried my best...

*edit*  Well, contrary to my expectations, I did actually come first.  I won loads of nice PD stuff, and I believe the mix (possibly along with an instrumental version) will be going up on that iTunes thing at some point soon, so I'm afraid to say the 'download' button's going to remain disabled for once!  I'll post more news on further developments when I know what they are.

I've also been dabbling with twisted surf music, putting my limited guitar playing abilities to the fore.  I'm hoping to do more of this stuff later in the year, once I get my strings changed.  Spreading myself too thinly?  Yeah, probably...

I think that's about it for now.  More before the end of the year, possibly including a new Mix90.  Or possibly not.  Thanks for listening, if indeed you still are.
Posted by ben_sH at 11:10 AM No comments: 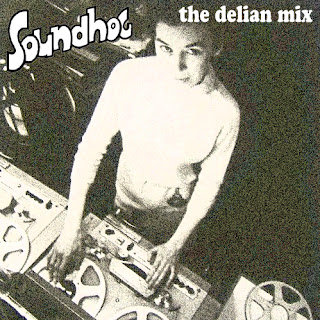 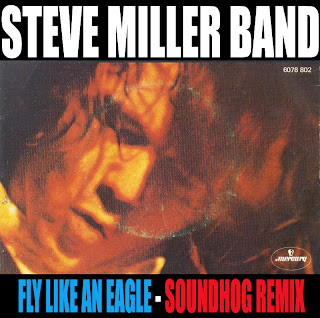 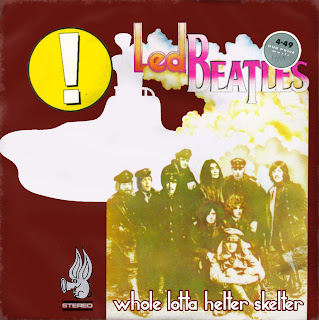 *edit 30/03/2014* It took over two years, but some miserable fuck at Universal Music Group finally took it upon himself to have this track removed from Soundcloud.  Not the end of the world, but annoying.  The video's still up at the moment, and a 320k mp3 can be downloaded from this link here... Makes you pine for the the good old days of EMI, eh?  And I notice there's been no online outcry over this, not even an solitary email of condolence... perhaps only people into shitty tedious over-hyped 'hip hop m@$hups' do that sort of thing?  Anyway, I'm not bitter or anything...*cough*

So after saying I don't 'do bootlegs' anymore, I gone and done another one.  I'm not setting out to make a habit of this, it's just that some nice source material came my way and I had a couple of evenings to kill. I don't think I need to say much else about this, really... it's all in the title and the artwork. Suffice to say, I'm of the opinion that if anyone else had attempted this, it would have been a disaster.  As it is, I think it's come out pretty jolly well.

Could this be the one which finally gets me appreciated and blogged about with 25,000 plays and a mention in Uncut/Mojo/Old Fart Rocker Monthly and all that sort of stuff, after 10 long years of trying?  Yeah, dream on...  Anyway, find a decent stereo system to play this on, and turn the volume control up all the bloody way.  Please let me know in some way if it tickles your rock buds.
Posted by ben_sH at 2:42 PM 50 comments:

Traffic vs Led Zeppelin - John Barleycorn Must Ramble On 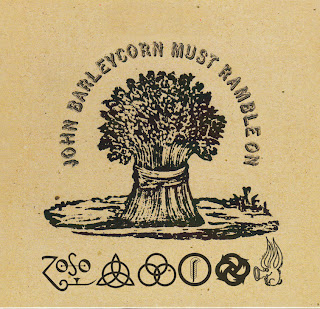 The keen brains may have spotted the fact that these days I don't really do 'bootlegs', or 'm*sh-ups' if you really must use that horrific term (now used in an advert starring Jennifer Saunders, for some revolting sounding chocolate and cheese snack). Many will know I can bang on at length about how what was an interesting art form has become something for the mildly talentless and easily pleased. However, occasionally I do get an idea which I just have to try out. Usually they don't turn out well enough to finish, let alone foist on the general public... or maybe they're too good for the likes of people who think a Nintendo-esque version of a Smiths song is really good.
Anyway, here's something I did, which I think has come out pretty well. It's sort of an attempt to put together a new West Midlands supergroup (with two additional members from the South East), despite three of 'em having tragically left this planet way too early. You'll probably be familiar with the mighty 'Ramble On', from Led Zeppelin's second album. You may not be quite so familiar with Traffic's 'John Barleycorn Must Die', but you should be. Here they are together.

The band: Steve Winwood - Acoustic Guitar, Jim Capaldi - Percussion, Chris Wood - Flute, Robert Plant - Vocals, John Bonham - Drums, Jimmy Page - Electric Guitar, John Paul Jones - Bass Guitar. If you like it, do please spread it around. If you don't, there's an inexplicably popular, Nintendo-esque version of a Smiths song floating around which you might think is really good.


*edit* - Soundcloud download limit busted (that doesn't happen very often around here), so the best I can offer is a Mediafire link for a 320k mp3 version: DOWNLOAD
Posted by ben_sH at 9:50 AM 6 comments:

I'm a bit too young to remember Thames Television's 'spooky' early '70s kids drama 'Ace Of Wands' the first time around (no, really) but I've always loved the theme tune. The work of one Andrew 'Andy' Bown, once a member of '60s heartthrobs The Herd, and future keyboard player for 'The Quo'. He was in a band called Judas Jump at the time of this track, and the sonic qualities of it are very similar to JJ's output, but it's better than anything on their only LP, IMHO (with the exception of the opening cut, perhaps).
Originally a snatch over 2 minutes long, I've somehow managed to almost double it's length (and stuck in a tiny bit of flanging, just for the hell of it). Original 7"s of this are normally well out of my price range, but if anyone's got one going spare..

If you've heard any of the other Mix90s, you should have an idea of what to expect. If not, I hope you'll find it an enjoyable experience. Everything in here is great, as far as I'm concerned. Well, there's one track which perhaps isn't, but I put it in anyway, just for the bloody hell of it and for the comedy value. See if you can spot it. Elsewhere there's beat, funk, psych, TV themes, a bit of prog, electronic genius, some hippy nonsense with extra hippies, library music, contractual obligation recordings, Japanese surfadelia, and bits of a 1963 birthday party in Brighton. All chosen and sequenced with a lot more care and attention than you might think, or than anyone else would smother on such a thing.  There's method in the madness, you know.